THE GOOD:
– The Food
– The Exit Aisle
– Bathrooms

THE BAD:
– Middle seat (really my fault)
– Time taken to clear the trays

ARRIVING AT THE AIRPORT

We landed early which had given me a full 2 hours to transit. I personally love transiting through NRT, just a quick security clearance done in an orderly fashion pretty much every time.

I managed to take a super quick peak at the KAL Lounge in NRT (Accessible for those with Priority Pass). I felt I didn’t have too much time so I just stopped by to grab a bite and a free drink.

Overall the lounge is okay, has a similar set up you would find in a lounge in America, except for of course the perfect pour machine! It was amazing to see it, if anything else. I then proceeded to down my beer and eat my onigiri and proceeded to head down to my gate and…wait

My flight has been delayed due to aircraft maintenance. While this is something that is routine, the crowd felt a bit annoyed that the gate agent didn’t give us an updated time or when to expect an answer until after she announced it 4 times over the intercom.

Finally around the time we were supposed to take off were able to board the plane. Interestingly they actually shuttled us over to the nearby cargo area for ANA, once we got on the FAs did the customary bows and readied the flight for departure with an hour delay. 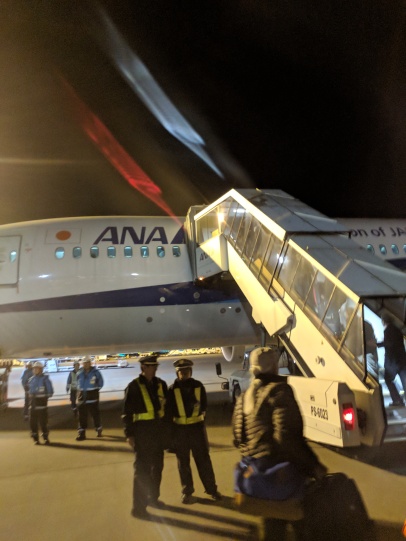 We boarded in the cargo area of the airport

I was pretty glad to have an exit aisle as it was a first for me. Unfortunately I was in the middle seat. I loved the space and leg room but was cramped from being between 2 big and tall dudes.

My first time in Exit row! The Middle seat still sucks though

We hit some very heavy turbulence early on which didn’t help me as I was falling fast asleep. Between my sleep deprivation, delays, and turbulence I was not feeling like I was enjoying the flight. But then the food arrived!

Rice Crackers which I had with some standard red wine

The FAs distributed the food in a timely fashion, they explained the menu with every row which is very nice of them. My row all ended up going for the snow crab w/ rice and my goodness was it amazing. 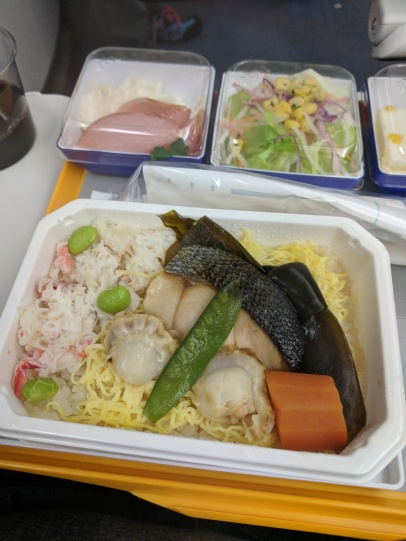 Economy isn’t so bad I guess 😛

It also came with a standard salad, ham and cold spaghetti noodles in a mayo based sauce (I think it’s their idea of pasta salad) and a small cake.

But the main! OH THE MAIN, it also included shredded egg, mackreal, and even some real baby scallops. The presenation allowed for every bite to include a bit of everything.

Once completed all I really wanted to do was get some shut eye, but unfortunately I had to wait for some time for the trays to clear, the FAs on ANA like to take their time with the passengers and like to offer additional coffee or tea but I guess my patience was being tested. Once done I was finally able to rest up and by the time we had landed I was awake but still needed some sleep. 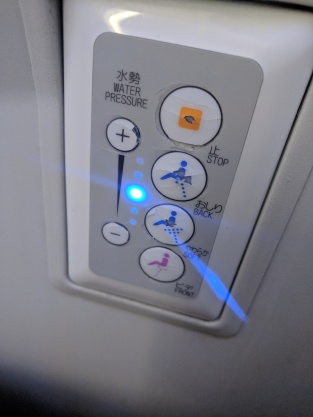 Yep, full Bidet, no heated seats but it does the trick 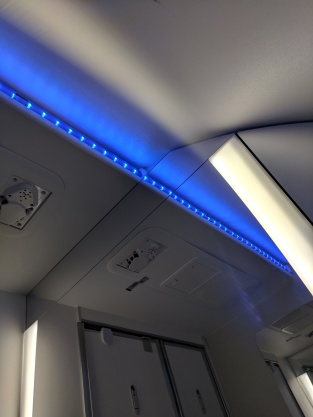 Impressive lighting for an economy bathroom

I managed to sneak a peak at the bathroom inside the 787-8 cause it was rumored that even in economy the toilets have a Japanese bidet system. I can confirm that it does and overall the bathroom was pretty impressive for economy. Good lighting, spacious, and of course it has the fabled bidet toilet. It makes quite the difference 😉

Eventually we began to land and we were finally in Bangkok, the delay brought us in around 12am instead of the original 11pm. We managed to successfully deplane and brought ourselves to the giant immigration area.

ANA has always been consistent in their service. The delay and the lack of reason was irksome but they managed to provide a mostly comfortable flight. The impressive food and general care for each passenger more than makes up for it.

THE GOOD:
– Service of the FAs
– Great IFE collection
– I got an empty middle seat

THE UGLY:
– The Sandwich

ARRIVING AT THE AIRPORT

I woke up at an unbelievable 5:30am in the morning something that, for me at least, is a feat. I have been trying to adjust myself into Asia/Thailand time so that when I arrive at 11pm, I can crash comfortably in the BKK airport.

I had arrived at ORD through the blue line, one of the many benefits of living in Chicago is that for about $2.25 I can take myself and my bag to both of the major Chicago airports.

If you use United in ORD, there is always the amazing light-work above as you walk towards the C-section departures

My general rule is to plan 3 hours for international and 2 hours for domestic, a rule which I should just consider breaking. Now that I can load boarding passes on my phone and I have access to TSA Pre-Check I was able to get to my gate in under 10 minutes. I had 2 hours and 45 minutes to kill so I wandered around and tried my best not to grab a quick beer before my flight, it is the morning after all 😛 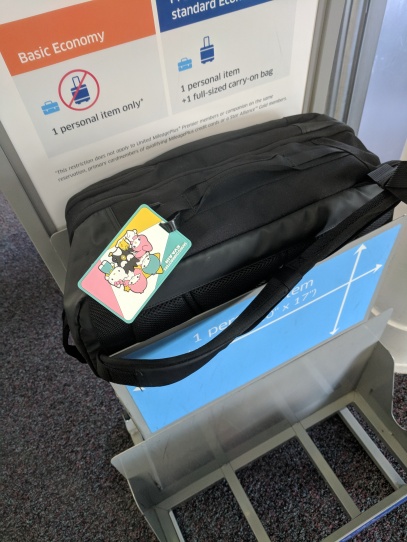 I was bored enough to check if my bag can count a personal item, close enough I’d say

My flight did arrive, and the crowd was fairly small with plenty of empty seats. Curiously some of the exit rows was empty, some folks asked to move up a row but the flight attendants explained that was for Premium Economy. Personally I feel like that exit rows would need to be filled regardless and shouldn’t be something left to passengers who paid more. 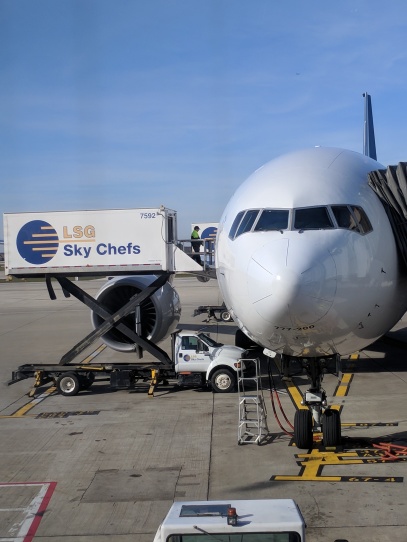 The flight took off and was smooth for the majority of it with only a single instance of having the seatbelt sign on. I then turned to the IFE console.

The console is in dire need of updating, I had to “double click” in order to select anything and even then the cursor trailed off to the other side of the screen if I wasn’t exact. That being said the content was plentiful, checked out some Marvel movies and tried watching the Simpsons. To my disappointment, the Simpsons just isn’t what it used to be, I guess same could be said for flying.

The seat however was pretty comfortable, it helped that I had an empty middle seat next to me. My seatmate across from me gave that knowing glance that we are indeed free to stretch out just a little bit more. I also got to test out my bag and sure enough, slides right down in front of me!

Lunch was served upon reaching cruising altitude, the flight attendants took the time to make sure everyone was served and didn’t seem as rushed as some flights can be. In case you missed it, yes, they served “lunch”, which was pretty light.

It is econ after all

A single “brick” of fried rice (veggie or chicken), the chicken was okay, interestingly they had dark meat which is rare for US airlines to include. They also included a grain salad which wasn’t really explained. It was…a salad? I still felt like I was shot up with the carbs.

Soon after I finished doing my Simpsons marathon I managed to get some rest, the real MVPs were my fuzzy socks and eye mask. But even more so is the headspace app that United provides. Not even 5 minutes into the “sleep while sitting” course and I was ready to doze off.

After a quick nap I had woken up and began watching some more stuff on the IFE to keep myself awake and keep going. At this time it was early morning in Thailand, I had to adjust to that. But the view outside was nonetheless amazing! An older gentleman seated in the exit row was watching it upon waking up thinking he was seeing the Colorado Rockies. I got the chance to see his reaction when I told him we were indeed flying over Siberia 😀

Without a doubt, it’s beautiful

Midway throughout the flight they offered people a small sandwich with M&Ms, the quality was equal to any sort of grab and go sandwich. Mine had apple and gouda in it, the sogginess made it easier for the bread to go down at least, ugh.

At least I was sustained?

What I did enjoy were the flight attendants (FAs), they were extremely polite and kept up the mood. They even spent time during the flight offering water while walking up and down the aisles. Something which their Asia-based counterparts tend to do.

Not pictured: me being oddly impressed

They had a choice between pancakes and a pesto/cheese omelet, I opted for the omelet which ended up tasting pretty good. It wasn’t a mysterious rubber blob like most economy breakfasts, though overcooked a bit, can’t blame them though.

Economy will always be that, “economy” and there is no way around it. However, for a US-based airline to do the little things like passing out water or distributing food at a pace that didn’t feel rushed made the difference to me. The flight crew provided a great flight even when the IFE and Food was lacking.